REIGNITING THE
PASSION FOR
PREVENTION

Eighteen months ago, I recognized I was burning out. After 23 years of practice, my days felt approach was losing subjectivity.

Although oral health care is continuously evolving and much has changed in what we know, my daily routine remained predictable and my passion for prevention was waning.

Acknowledging that I still have quite a few years of practice ahead of me, I went on a search to reignite my enthusiasm and re-establish effective conversations with my patients.

My search brought me to an online article in which the author discussed the benefits of pre-polishing teeth before scaling which included the reduced need for instrumentation, improved patient comfort, more efficient appointments and improved patient interaction and autonomy for their oral health.  This wasn’t the ‘lightbulb moment’ I was looking for but it was an easy and immediate change that I could make.

The implementation was fairly smooth as I began each appointment with “We’re going to do things a little bit differently today” and asked the patients for feedback at the end. The patients commented on the reduction in instrumentation and I immediately experienced the outlined benefits outlined in the article, however it still wasn’t the commodious change I was hoping for.

Soon after, I came across the Swiss Dental Academy’s Guided Biofilm Therapy (GBT) protocol which enhanced and gave substance to the transition I was making. I was given the opportunity to travel to the EMS head office in Nyon, Switzerland to learn the theory and evidence behind the protocol as well as be introduced to the technology in their new AIRFLOW® Prophylaxis Master unit that was being launched.  At the end of the course, I knew that this was what I was looking for and I was eager to return to my practice to implement my new found knowledge.

However, to fully embrace this move, it had to be a full team approach. I needed to convince my dentist and other hygienists to also firstly adopt this protocol and secondly, to incorporate an AIRFLOW® unit into our practice.

Asking my dentist to invest in our hygiene department by purchasing the unit required some investigation and planning.  This wasn’t a standard “it’s been 18 months and we need new scalers” request nor asking purely for a financial sum, but rather for an entire practice of 7 practitioners and 9 support staff of nurses, front office co-ordinators and management team to incorporate a change of mind set from what we know as ‘conventional prophylaxis’ to a minimally invasive way to manage biofilm and its effective removal.

I was initially met with some resistance and uncertainty from my team when I broached the subject but after being given the opportunity to present GBT to the entire team and aligning the protocol with the benefits I was experiencing, they were willing to undertake a change in routine by following the GBT protocol and pre-polishing their patients with a standard, slow speed hand piece. They soon began to experience some of the benefits that I was experiencing since implementing GBT however, we still needed to improve on the method of removing biofilm both supra and sub-gingivally safely and effectively around not just natural tooth structures but also around implants, crowns and bridges and orthodontic brackets with which traditional polishing just wasn’t as effecacious.

We invited an EMS educator to our practice for an in-house demonstration of the AIRFLOW® Master unit where practitioners had a chance to be both patient and practitioner and experience GBT utilising AIRFLOW® technology.  After having the opportunity to perform a full appointment with the unit, the hygienists were on board with my new found enthusiasm and agreed that this was something we needed in our practice.

I presented a business plan to my dentist and office manager who, recognizing my new-found energy with GBT, replied to my request to invest in the hygiene department with an AIRFLOW® Master unit by saying If I was asking for something of this magnitude, he trusted that I would make it work.

Introducing the AIRFLOW® into the appointment was equable as I had already begun ‘conditioning’ my patients to GBT but was replacing the pre-polishing with air polishing.  I expanded my explanation of the unit to include how the unit works in the most minimally invasive way to remove biofilm both above and below the gumline more effectively, efficiently and comfortably than I have been able to with traditional methods.

At the end of the appointment, I always seek feedback and the overwhelming majority of patients comment that their appointment was much more comfortable, their teeth feel great and many saying “That’s it? Wow!” My initial concerns about my patients’ reaction to change were alleviated and I reminded myself that it is us as professionals who condition our patients to expect the treatment they receive.  By providing a brief explanation at the beginning of the appointment as to why I have chosen to practice GBT and including them in the process, they have all to date been happy with the implementation.

How has this changed things for me?  By following the GBT, I am spending more time educating my patients about their oral health and prevention, with our conversations being more subjective and effective because they can see what they are missing.  They are becoming more engaged and autonomous with their oral health and look forward to seeing the improvements at their next ‘AIRFLOW’ appointment. My appointment times have reduced and I now see more patients in a day which has translated to increased production.  I have less hand and overall body fatigue at the end of the day due to decreased instrumentations and patients have been telling their friends and family about the ‘new technology’ we now have.

Why did I specifically choose the AIRFLOW® Prophylaxis Master unit over other air polishers? The technology within the unit allows the operator to control the temperature of the water output from unheated up to 40 degrees, ideal for sensitive patients.  The AIRFLOW® handpiece can be directed  both supra and sub gingivally while the PERIOFLOW® handpiece provides access for effective biofilm removal in pockets from 4-10mm around both natural teeth as well as implants. The benefits for both practitioner and patient were conspicuous.

And what does my dentist say about GBT and AIRFLOW® technology? ‘The implementation was seamless and the immediate report back from patients’ was that this was the best and most comfortable appointment with the hygienist they had ever experienced. The initial resistance from the rest of the hygiene team has turned to excitement and friendly in-house arguments about who gets to use the Air Flow®.   The results with biofilm removal were also very impressive and we are awaiting delivery of our second unit so that all of our patients can experience GBT with the AIRFLOW® at every appointment in both of our hygiene rooms’.

Deb is a Canadian trained Dental Hygienist with an Advanced Dip in Restorative Dental Hygiene.  She was a lecturer and clinical demonstrator in the ADOH program at RMIT and has held both executive and non-executive positions with the DHAA (Vic branch). Deb has lectured nationally on smoking cessation for oral health professionals and is currently working in private practice while working towards her Masters in Clinical Teaching.  She is also an Educational Consultant for Hu-Friedy and loves her Air Flow® Prophylaxis Master so much, she now works for the company as an Educator! 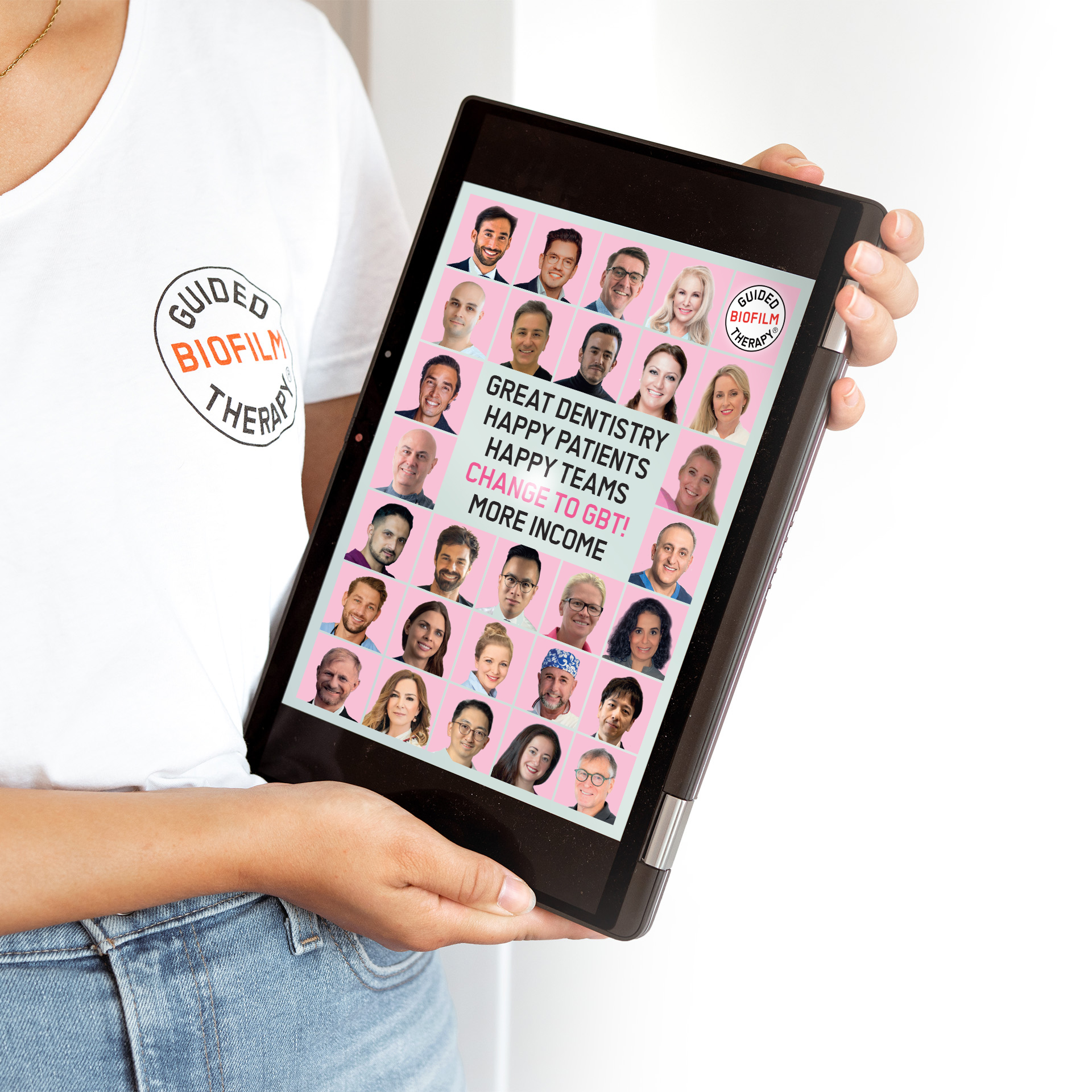 DOWNLOAD YOUR FREE E-BOOK:
TAKE YOUR DENTAL PRACTICE
TO THE NEXT LEVEL WITH GBT

Get to know 24 GBT clinicians from around the world in the new interactive e-book "Take your dental practice to the next level with GBT" and find out how Guided Biofilm Therapy has changed their daily work. Discover how the introduction of the GBT protocol has impacted the practice team and patients of the featured clinics and why the clinicians became a GBT Certified practice.